Here we were again. How long would we stay for this time, 3 months, 5 months? The local hospital was by far not the place we wanted to be again and with a 5 day old baby and recovering from a c-section, this time it would be an uphill struggle. At least we have a diagnosis this time, maybe we could get somewhere. GNA01 mutation is what they called it. With 13 cases worldwide, it still seemed to leave doctors scratching their heads for the best day to day management, of an involuntary movement disorder that had left my son battered and bruised on a good day. 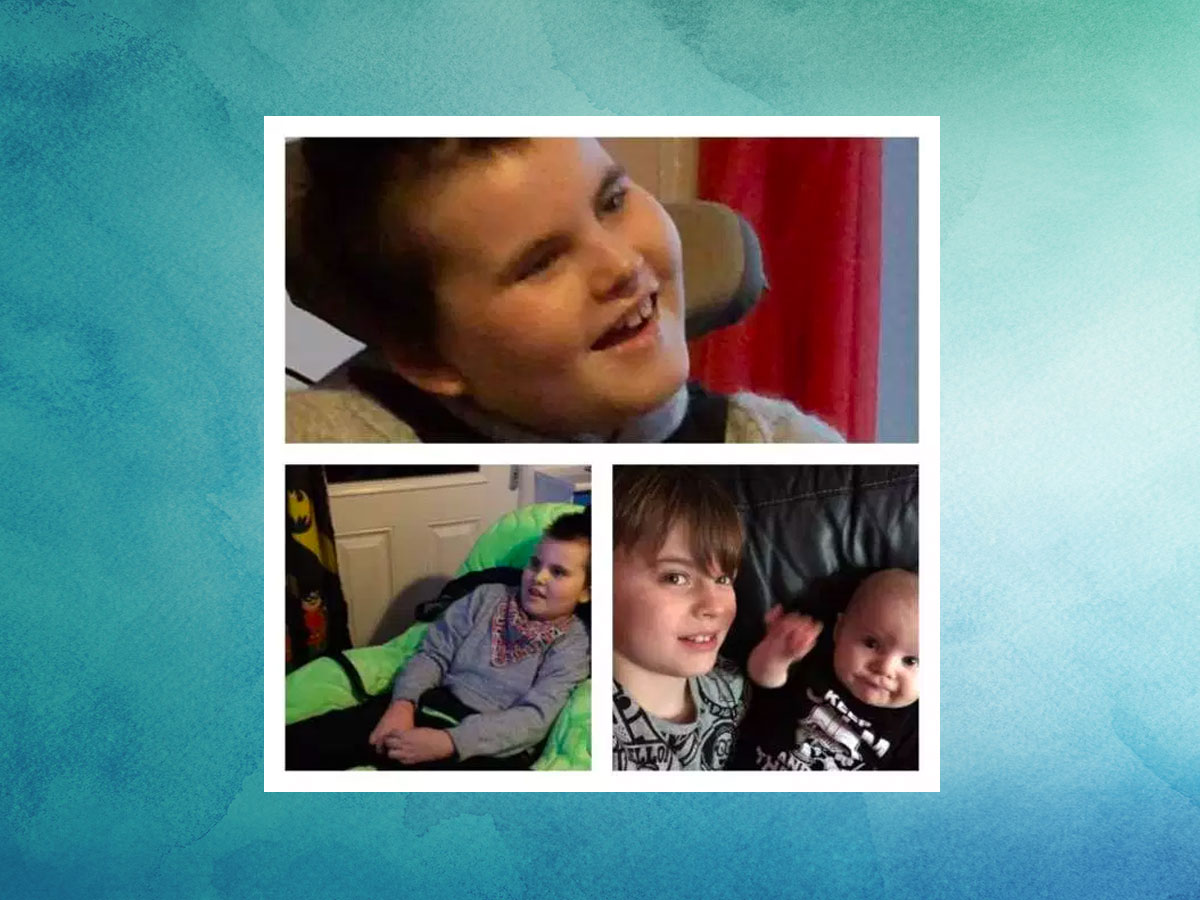 We’d done our best to keep him at home, massive doses of oral medications that left my son unrecognizable most of the time with just glimmers of his old self. Meds through the night, 3 hourly, just to try and keep him still, all to no avail. He thrashed, sweating and out of breath like he’d run a marathon, screaming out with a terrified look on his face, but he couldn’t stop, he had no control. It had become something that we’d had to live with, crossing our fingers as we put him on the school bus that he’d make it there. One day we put him on, for the bus to turn straight back around at the end of our street, he wasn’t safe to move, even from his bedroom to the living room. The distress of the movement was most distressing for us and Zakk, especially as he has no speech to tell us what is wrong.

2 years of battling the movement and here we were, this time, Zakk’s lips had gone blue and he was grinding his teeth with the movement, so we were scared and called 999. Blue lighted in, my husband had to go with him as I was breastfeeding my 5 day old baby. Managing the situation remotely through phone calls with my husband, I remember crying so much. I couldn’t be with Zakk as I had always been through these situations, making sure the medical team didn”t make a single error as this can have drastic effects for Zakk as had been proven in previous admissions. They just don’t understand his condition, it’s so rare, they’ve never seen it before, usually I’m there, the “expert” for Zakk, advocating for him. Yet I’m stuck at home trying to do it with second hand information, so yes tears, lots of tears.

Intravenous Midazolam, Intensive Care, the usual stressful hospital emergency we had been through so many times before. But this time, 4 weeks later we had no route out, Zakk wouldn’t let his sedation be reduced without the movement coming back, we were stuck.

We’d received his diagnosis 6 months previous to this admission, on a better day with the help of Buccolam, we had managed to get him to Great Ormond Street to see a specialist who referred us to Professor Lin at the Evelina Children’s Hospital in London as a possible candidate for Deep Brain Stimulation(DBS). Little did I know that this decision would change our lives!

We’d had an initial consultation letter and a date ready, which I mentioned to our Neurologist, so the race was on to get Zakk fit enough to keep that appointment. It wasn’t looking likely that Zakk could be taken off intravenous medication, so our Neurologist thought best to cancel the DBS appointment. CANCEL? I lost my s***t, we need to get Evelina in on what happening here, we can’t carry on like this we NEED a way fwd, we were going round in circles. Our Neurologist, clearly out of his depth but not wanting to admit it reluctantly agreed to contact them.

What followed on Professor Lin’s advice, was a medication change, which didn’t completely manage the movement but allowed us to get Zakk off Intensive Care and onto a ward. There we waited, I contacted Evelina myself, I broke down in tears, so frustrated, how were we even going to get Zakk there safely? He was still so unstable, with almost anything triggering an episode up to 40 mins long, where he just isn’t safe unless he’s on a padded bed? The Team there were fantastic, they decided to cancel the initial appointment but instead take him as an in patient to perform tests to see if DBS would be a viable option.

We had a date, a week in London it was, the day came, we waited for ambulance transfer. 10 hrs later, we were on route, no bed, then a bed- but no ambulance had stretched the day out and made it very stressful, but we were on our way, progress, stepping fwd for the first time in 2 yrs!

3 hours later, we arrived, we’d done it, we’d got him to someone who may have a clue what’s going on here, albeit 100 miles away from home, away from my 3 month old baby and family. Isolated, but focused, a live wire, was how I felt. Meeting person after person, goal setting, presentations/teaching, MRI/CT scans and brain reaction tests. All go, sleeping on a slab of a bed next to Zakk each evening, washing our clothes and drying them in his room, the most stressful, intense week I can remember in my life. Zakk still thrashing for 40 mins at a time, even with 2 hourly medication, but we were in good hands, people who had seen this before, for once I felt listened to and understood.

There’s a good chance DBS could work! There was a girl with Zakk’s condition who had it done previously who was doing well, reports of other children with his condition responding well, but nowhere near enough for the medical team to be certain it will help Zakk. He was a candidate, but now I had to decide…should we go through with 6hrs brain surgery that could make a difference but might not, complications as with any surgery explained, nothing has worked so far, why would this, what else could we do…let’s do it.

25th October 2016, Zakk had the surgery and it has transformed his life. 6hrs of waiting for your child is an anxious time but the operation had gone well and was a success with no complications…at last, something had gone right. 2 weeks later we were home and he was back at school! Movement managed, still some sign of it, but not enough to make him unsafe or kick off a major episode.

He’s now 5 months post DBS and what a difference! He has a while to go to get back to where he was before this whole nightmare began, but the movement is controlled, he goes to school everyday, we go out again as a family and he is laughing at his favorite films once again ❤

We had to go back to London every month for the first 3 months which has been challenging, but now we await his 6 month post DBS review. This is nothing compared to living with his crazy movement. Life is once again positive, all services/support resumed. Respite now goes ahead instead of being cancelled because we can’t get him there, and believe me, with a now 8 month old baby I need it.

We’re at the end of a 2 year battle, I’ve overcome things I never believed I was capable of doing, whilst keeping my sanity. I’ve stood up and argued with consultants to get Zakk where he needed to be and now it was well worth it, all whilst balancing my family and a new addition. I look back and can’t believe this happened to us, it sounds like something you read or see on the TV, it’s so much to go through and very bleak a lot of the time, but I’d do it all again to get Zakk as happy as he is today!