An Artist and So Much More

Hello! This is Harlie Morgan. She is 6 years old and has a rare de novo genetic mutation that has caused a string of medical issues. It is so rare (around 50 kids worldwide) that it doesn’t have a fancy name yet and is just called a “GNAO1 mutation.” This mutation causes Early Infantile Epileptic Encephalophy (EIEE17) which is the worst kind of epilepsy. Harlie is a fighter. It has left her developmentally delayed in all areas and completely non-verbal (she laughs and cries but no words) as well as facing severe physical challenges, but we continue to fight and pray for a cure. I find comfort in researching and learning all about Harlie’s diagnosis, so I wanted to briefly share a little about Harlie in hopes of helping others.

Harlie loves to laugh! She lights up the room with her excitement and it’s hard not to fall in love with her! Harlie loves all things Disney – Frozen, Moana, and Minnie Mouse being her absolute favorites. Swimming is Harlie’s favorite extra-curricular activity which we assume is because she actually feels free in the water. She participates in weekly indoor aquatics therapy in a heated pool, which she loves. She would swim in that pool every day if she had her choice! Harlie also loves her Kansas City Royals! She will cry if you turn away from the game and will yell at you if you stand in front of the TV when the game is on, something her 4-year-old brother Marshall has finally learned! Her favorite Royal is the announcer, Rex Hudler. I think she associates Hud’s voice with the Royals playing and gets SO excited. Harlie is also quite the artist. She loves to paint and has entered several worldwide art competitions. She loves making new friends but gets a little anxious when people invade her personal space, but who doesn’t? Although she can’t verbally communicate, she does understand what other people are saying to her and about her. She uses an electronic communication device to express her needs and uses a gait trainer for mobility. 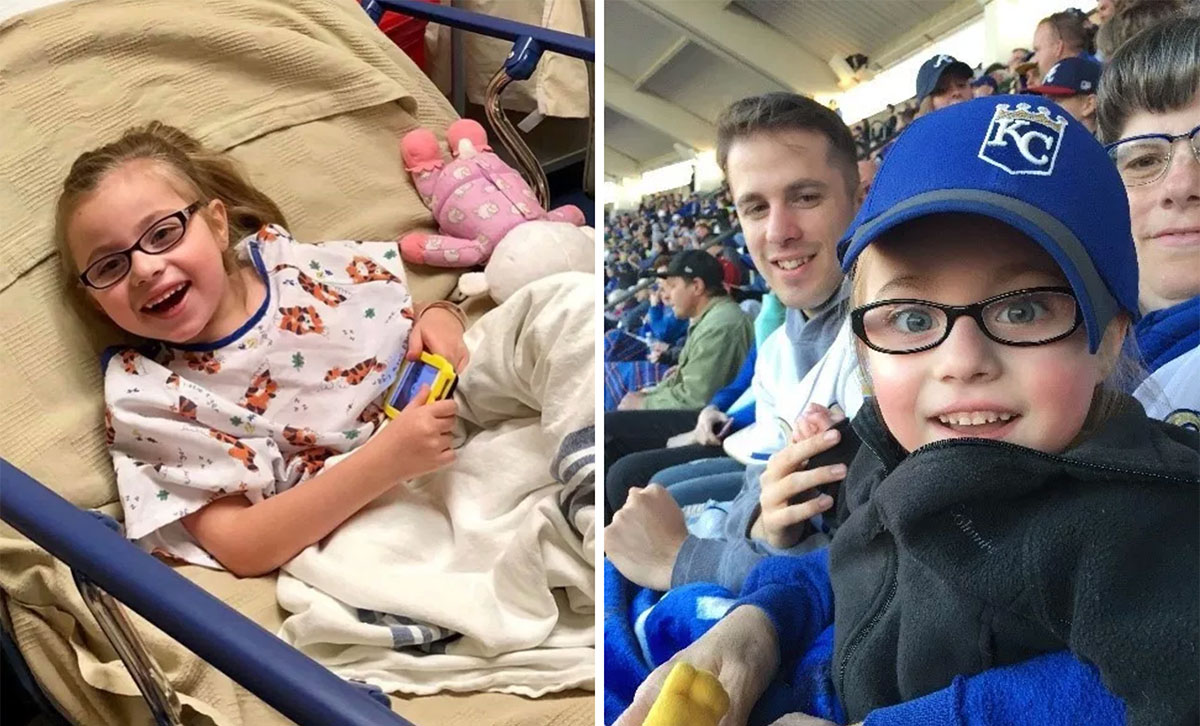 Harlie had her first seizure on January 13, 2012 at only 2 ½ months old. By the time we got to the Children’s Mercy ER, she had already had 12 seizures; that is when our journey really began. She has fought through the epilepsy, swallowing difficulty, hip dysplasia, developmental delay, optical issues, sleep issues, hearing issues, various therapies 5 days a week, several genetic tests, medical studies, multiple surgeries (in the past and more in the future), and has seen a lot of specialists. We found out in September 2016 that all of her issues stem from her GNAO1 mutation (p.Tyr291Asn (c.871T>A)) and finally we had a concrete diagnosis although it was easier when we had our heads in the sand. Finding out your child’s diagnosis is extremely rare, medically complex with no effective known treatments, and no cure is indescribable. Becoming the “GNAO1 expert” and explaining her diagnosis to every medical professional we’ve met because nobody has ever heard of it has been quite the adventure. Through every challenge Harlie faces, she continues to smile – so we continue to smile. We take life one day at a time and cherish every moment we have. We don’t know what the future holds, but we hope that Harlie will make friends and continue to love life. We want her to enjoy the same experiences as everyone else and continue to make a positive impact on the people around her. Something we hear a lot is, “What is WRONG with your daughter?” There is nothing “wrong” with her, her path in life just looks a little different than most. She still wants what every other kid wants: friendship, respect, and inclusion. Thank you for taking the time to learn a little about Harlie and please don’t hesitate to reach out if you have any questions, comments, or stories to share. We don’t mind discussing her medical history as we believe that open dialogue leads to understanding and acceptance. “Some of the most wonderful people are the ones who don’t fit into boxes.”