I had never known what resilience was until I met Emi, my little daughter.

She was born in October, 2010 almost 2 months earlier than expected.  I remember she was a little baby in the Neonatology Box, sleeping without her mummy.  It seemed she was there without any fear, trying to remove the feed tube of her nose.  A nurse told her, “Emi if you remove the tube, you will have to be fed by your mum.”  She did not have enough strength to suckle. And I had just had a surgery and did not have enough milk for feeding her but finally she managed to remove the tube, I was terrified, then the little baby looked me directly to my eyes making contact, and opened her mouth: the sweet link between a mother and a daughter had begun.

That was the first time Emi taught me about resilience. 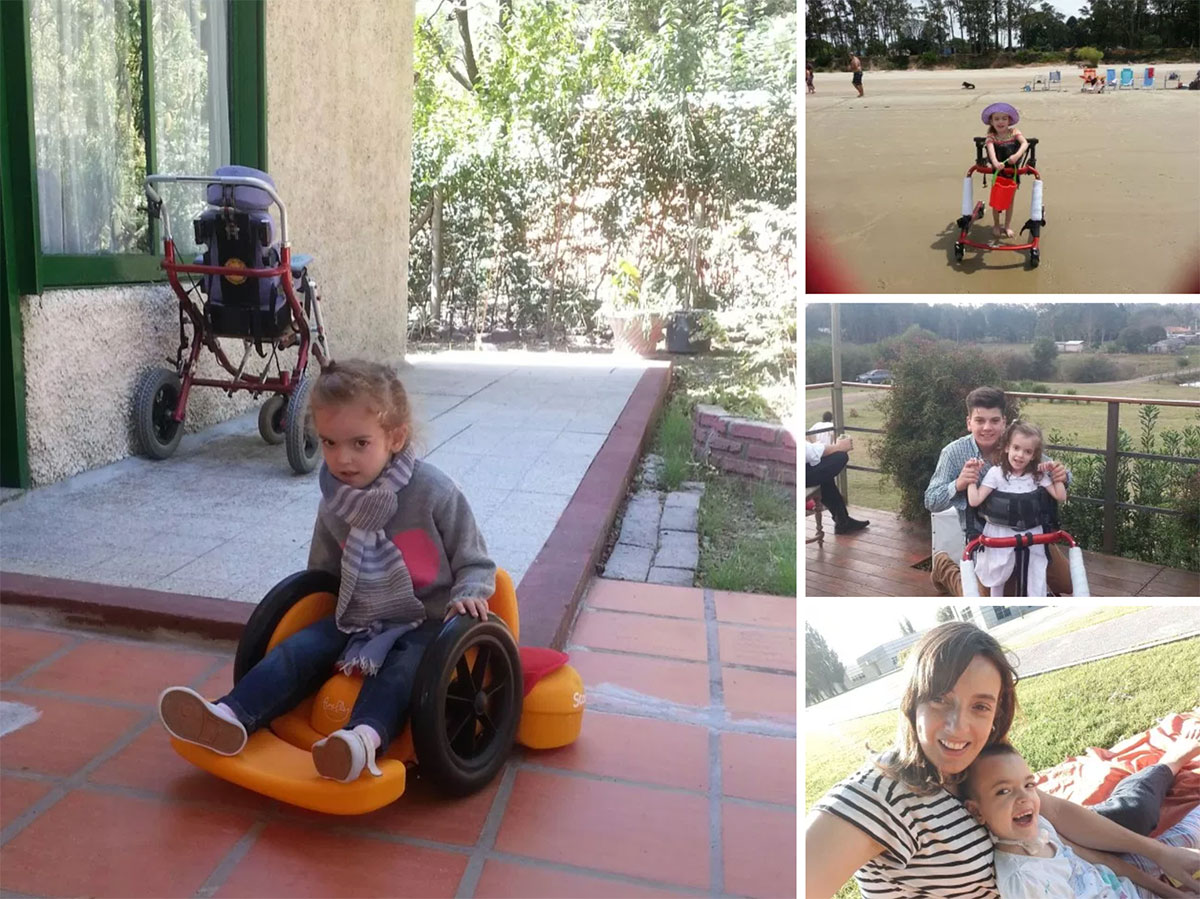 Our first year was normal, like others families, until she was 6 months in when our pediatrician started to suspect something. Emi was not achieving the average skills for a baby of her age.  That was the time we met our first neurologist. They said she has hypotonia, and motor development delays, they did not know if she would walk, or talk. Even worse they did not know what was causing that.

It was not easy but at the same time you have the opportunity to discover a new world, to be a special parent (a parent of a kid with special needs).  My little princess always showed her strength, never complained when she was examined, when she was put to a new and sometimes painful or invasive treatment and when she had her therapies.  She never complained, she did it, always with a smile and good vibes.  In the process, the people who met her, started to fall in love with her. 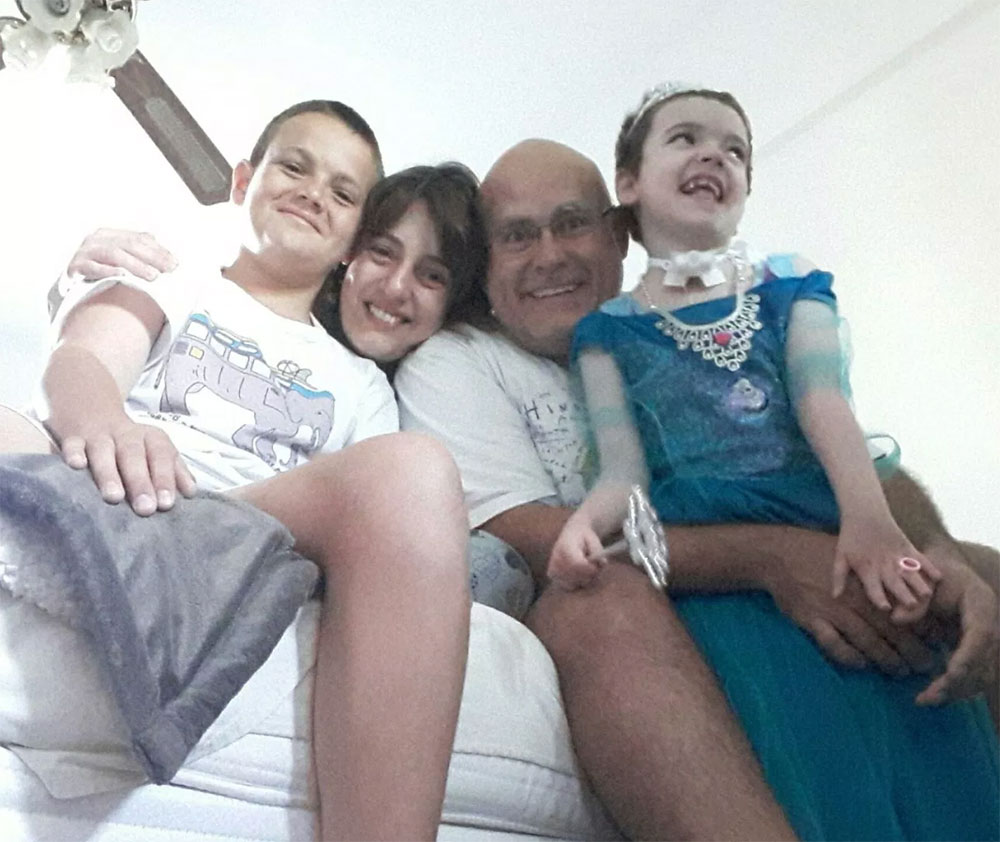 The long stay in the Hospital

The last three years Emi had had some episodes difficult to explain. Orofacial dyskinesia, a type of mouth`s involuntary movement. It used to happen very shyly and it took 2 or 3 days, no more. At the beginning something imperceptible, however each episode was longer, and more intense.

I remember those days but none of our doctors were worried, and even when we flew to Rochester, NY to see an expert in movement disorders (Dr. Jonathan Mink) he told us that these kind of involuntary movements were a symptom of something like fever that is triggered or sometimes when she is dealing with an infection, anxiety or stress.  We could deal with it; it was not our main issue.  So, we forgot about those episodes and we put our energies in giving Emi all the opportunities for improving her motor skills.  Speech therapies, OT, motor therapies, horse therapies, assistive technologies and equipment’s.  In parallel we continued looking for her diagnosis, the cause of those symptoms, we send samples to everywhere, we made queries with specialists in Spain, US and Japan.  We discarded a high number of possible diseases at that time we did not know the name of the “monster”.

In August 2016, after a gastroenteritis she displayed those movements again, but this time they took longer, and they were stronger.  One week later she was in the ICU drug induced coma, mechanical ventilated. The violent involuntary movements migrated from her mouth to her limbs.

My husband and I did not understand anything.  Our hearts were broken seeing her.  What was happening? Come on monster, show your face!

They tried several neurological drugs for almost 2 months, but nothing worked.  I learned to count the number of sedatives rescues she used to receive to measure the level of her crisis.

In parallel and with the help of good people we managed to send blood samples to South Korea and the US, to have a new test done, a Whole Exome Sequencing, essentially a mapping of her DNA that would detect every mutated gene that could be the possible source of the symptoms.  At that time, genetic disease means that we would put a name to the monster, but we could not give her a cure, only relief for her symptoms and look for other cases in the world.

2 days before her birthday, October, 25.  The number or rescues started to decrease and finally she opened her eyes smiling as usual, recognizing her brother Mateo.  She went through cycles.  She was in ICU and every intra hospital virus triggered the crisis again.  We were stuck.  Our neurologist gave us a new article about a gene called GNAO1 which mutations were linked to some types of epilepsy. But recently a few cases (6 the article said, only 6 in the whole world) with children with severe involuntary movements were detected to have the same mutated gene. The same article said that the crisis was highly resistant to any pharmacological treatment.  We had tried almost everything.

To fight for her was our duty.

We started research and found a medical article in where it was described a little girl in Turkey with the same mutation, that had underwent a surgery called Deep Brain Stimulation. A surgery usually for Parkinson. There was not much experience with cases like ours, or with young kids.
It was also the option that our neurologist had in mind, so she made and inter-consult to the referents in this procedure, Dr. Jean Pierre Lin, from The Evelynda hospital, in London.

We spent the Christmas in the hospital, we made a Christmas tree in her room, at that point, 4 month later, we were a family there.  On January 4th,2017 Emi underwent surgery, deep brain stimulation, first case with her condition in Argentina.  Several neurosurgeons and other members of the team were part of the procedure. The surgery took 11 long hours.

They turned on the stimulator two days later, at midday on a very slow setting, that night Emi received the last rescue medicine.  They started to decrease the level of sedatives, slowly, day by day.

4 weeks later our brave girl was discharged of the ICU without any crisis.

Unfortunately she was operated again 4 months later due to a staph infection, at beginging of August.  We camped in the hospital for almost a year.

There is a song is Spanish that say ” me pasaron tantas cosas, que no me acuerdo de nada” So many things happened to me, that I do not remember anything. This entire long journey would be summarized by that phrase.

Now Nov 2017 we are backed home. Emi is doing well and we are on track again in our long journey of giving her all the opportunities to sort her motor issues.  She may walk one day, she may talk one day.  We do not know but we work pursuing these goals every day.

THE GNAO1 Family and the BOW Foundation

During the stay in hospital and as soon after we were told about Emi´s diagnosis, we found on the Internet (Facebook) the few other families with the same genetic disease. For the first time our condition was not rare for some people, for the first time we did not feel alone anymore.
At that time there was a family in the US struggling with the same situation as us, and some nights we exchanges messages, from ICU to ICU.

In my case, close to the surgery date, as soon as I found the other families, we had the opportunity to hear their testimony and ask them about every step of her recovery. I knew Deep Brain Stimulation was totally new for the cases like Emi´s, but I could hear the others testimony, and it had worked for other kids, I knew it may work for my daughter.

Now, looking back, one year later, we understand that we had luck, to put our daughter in the best and expert medical hands we have ever could.

Along the process we touched base with the Bow Foundation, doing great things for the GNAO1 awareness, supporting the families and fundraising for research.

We are working on understanding this disease just discovered, and in consequence to find a cure in the near future. But we also are pursuing to make awareness for an earlier Diagnosis and intervention.  There are several kids suffering for the same illness without the possibility to receive at least a treatment for the symptoms. They are just kids.

So, you have reached us, and now you are part of our family. Your support is very important for us.

Thanks for being with us during this long journey. We will continue together as a Gnao1 family, pursuing the same goals.